Last night the gaming room hosted its first multiplayer event as our little part of the world returns to something of a new normal. While I have had a few games over recent weeks, as social distancing here in New Zealand has now ceased, the return to a multiplayer game is something of a milestone.

What better way of marking the occasion could there be than a light hearted evening of Wings of Glory? While a few regulars where unable to attend we still managed a respectable six players. 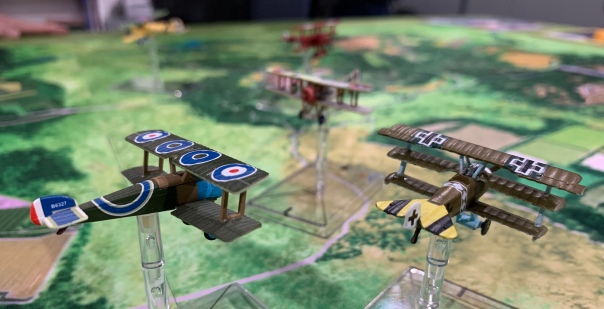 Our first scenario was a traditional dogfight with three German players, flying two Fokker Dr.Is and an Albatross, taking to the sky against three allied pilots flying two Spads and a Camel. Trying to recall the aircraft involved is hard enough, but the antics involved are for me, the following day, all but impossible. However as machines clawed their way through the skies and the burst of machine gun fire filled the air it seemed only the smell of oil and burning canvas that seemed to be missing.

One new pilot ventured into the sky for the first time, yet to his surprise Pilot Officer Shield, flying the Camel above, had an outstanding first encounter. A sharp contrast to one German pilot whose machine exploded when first coming under fire! 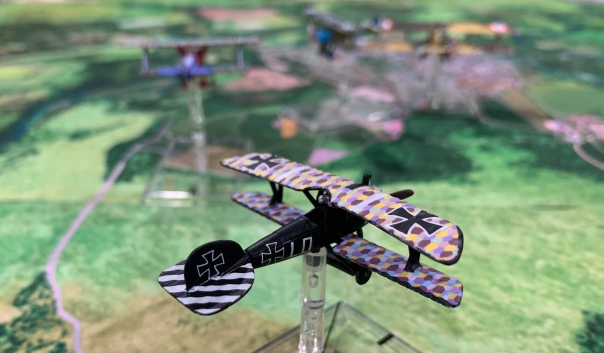 Below, a Bristol F.2B is hoping to manoeuvre against an Albatross in the foreground. Meanwhile while a Fokker D.VII, just visible in the background, has similar intentions on the F.2B.

Expert flying by the Belgian pilot found the bombs being successfully dropped, However, his return towards Allied lines was more difficult. The German pilots stuck to him like glue, despite him evading and repeatedly dropping altitude. Unfortunately the Germans could finally claim a victory as the Breguet went down just feet above the trees.

Our final mission of the evening was an Allied balloon busting mission. A Nieuport armed with rockets was to be the main attack closely supported by a Camel and a Bristol F.2B. 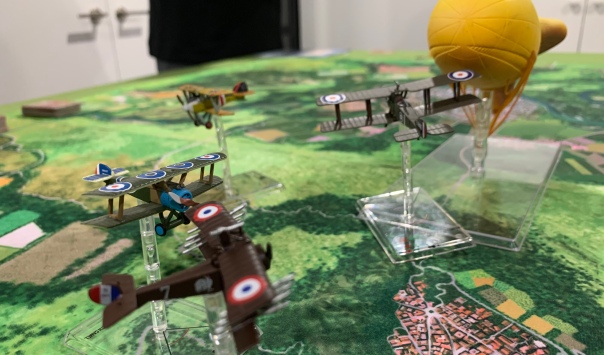 However, such plans quickly come adrift as the Nieuport pilot repeatedly failed to line up his attack. Further, the various machines soon become increasingly crowded around the German balloon as allied fighters attempted to escort the Nieuport, while dodging the Germans. My own machine, the F.2B, managed to fire several bursts of fire into the balloon and this increasingly this became my focus. 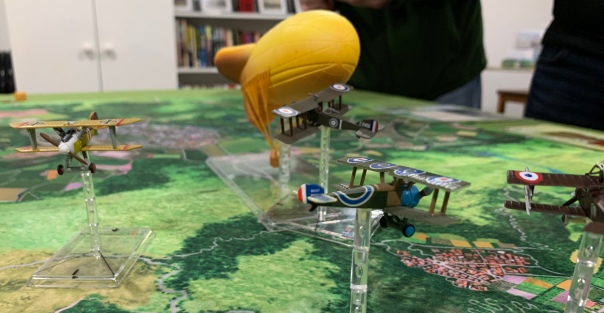 Then on the second pass a well aimed burst of fire from the front guns hit the balloon and ignited it. In a moment a massive explosion erupted which destroyed three other aircraft, two German and one British!

A dramatic, if somewhat abrupt ending to an excellent evening of gaming in the sky. I must say these rules really do provide a most enjoyable evening of entertainment.

Like many in the world the COVID-19 pandemic curtailed my regular gaming. Gone were the weekly DBA gaming evenings and the larger Friday evening games and multiplayer events. But what did I replace my evening games with during our very restricted lockdown?

Well like many my painting increased and more units marched off the painting table into my various armies. However, one of the most interesting aspects was our Friday evening virtual wargame video meetings. Friends around the New Zealand, and from overseas, joined to discuss painting projects, books as well other wargame subjects. Some of my favourite topics were the in-depth presentations. 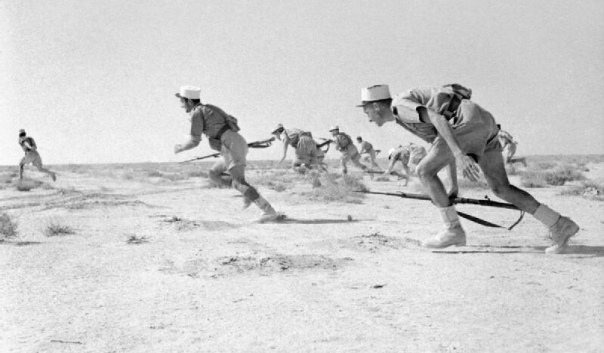 These included the history of wargaming in France, which looked at developments from the 19th Century, to the 1980s – truely fascinating! This was followed by the equally fascinating presentation on depiction of World War II in French cartoons, all published in 1944 and 1945. Finally, there was most interesting look at the Battle of Bir Hakeim drawing on French and German sources which will soon be published in France by the presenter, a professional historian.

Anyway, feedback from those joining the video conferences each week was that they were all very successful.

In addition to these virtual meetings my son and I played a number of DBA games during the lockdown using Skype. Starting as something of an experiment we quickly found the games worked well, at least for experienced players. A summary of some of these games can be found here.

Finally, I hosted a multiplayer Spearhead game that ran over several weeks. Involving nine players from around the country it provided a rather unique gaming experience. If you are interested in reading more about the game you can find a report here. 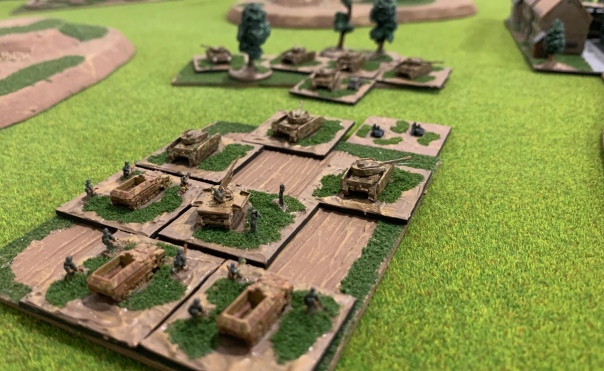 All these initiatives provided a little distraction in what is a very challenging time. Fortunately I live in New Zealand, and with the situation improving here finally I find my gaming also returning to normal. However, for those readers still in the thick of the pandemic I hope that your hobby is providing you with something of a distraction, even if friends aren’t catching up in person. Most importantly I hope you can enjoy your hobby without compromising your safety.

Finally, after quietly sitting in the lead mountain the first of my Seven Years War Austrians have taken the field against Frederick the Great.

The Seven Years War is an interesting period and one which has appealed as a miniatures project for many years. However, stirred by my visit to the battlefield of Kolin and Hapsburg Vienna a couple of years ago I finally made some progress. Yes, its hard not to be taken by the period with so many fine statues of those great Austrian generals proudly marking the tenacity of Austria to Prussian aggression. 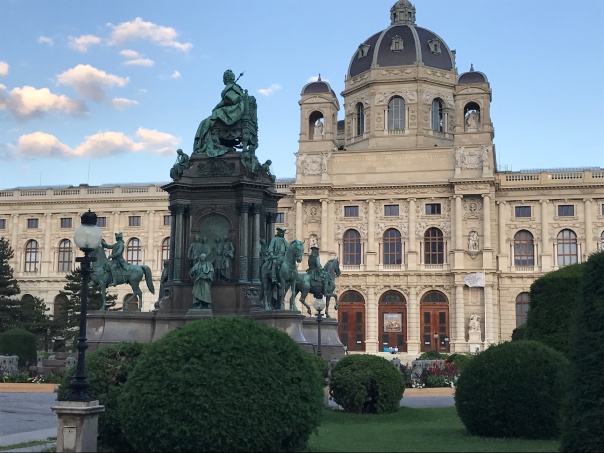 Fortunately one of my regular opponents had previously completed a significant proportion of a Prussian Seven Years War army in 6mm. However, with no period opponent these Prussians were used to represent the Prussians in 1806, a role that they have fulfilled diligently for many years. 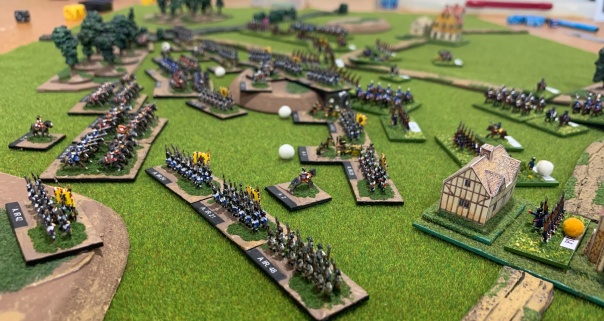 I have of course posted previously on painting the Austrians However, if you are interested there is now a selection of photos and description of our first 6mm Seven Years War engagement fought using Volley & Bayonet, you can find it here.

Here we are at the beginning of another year. As always it’s a time to look back at the past year and for many of us to ponder what this year may hold. For some readers 2019 will have had a number of challenges and several hardships. I can only hope that your friends and family have been able to rally around and your gaming has provided some enjoyment.

For me the past year has certainly been busy, on both a personal and professional front. Yet, from a wargames perspective it has been rewarding with much painting, organising and gaming. 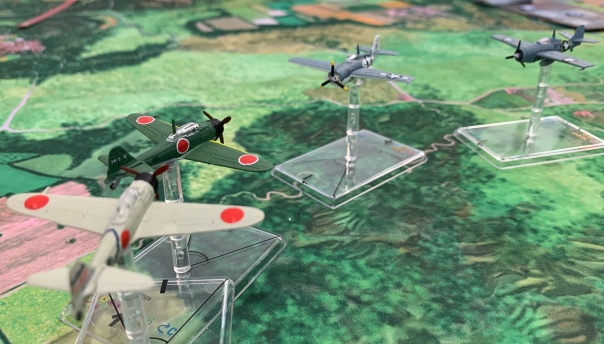 Game wise I again have again been fortunate with a number of regular opponents and regular games across most of the periods I’m interested in. These have ranged from small games such as the Wings of War game shown above, my last game of 2019, to larger multiplayer events. I find myself pondering what form the larger games could take during the year. It will be interesting to see if what eventuates in this space.

My painting projects have burst into life this year and some are almost complete. I have for example made significant progress expanding no less than three 6mm armies for use with the WWII Spearhead rules. Of the three Spearhead projects the Soviets were certainly the largest and while not complete, the back has certainly been broken. 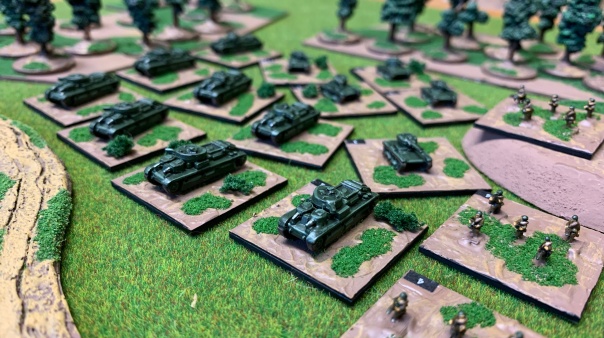 In addition I’ve  painted some long overdue 15mm DBA armies which have languished unpainted for far too long. In particular the Gauls who have been campaigning against all manner of historical opponents. Further, additional options have been completed allowing the expansion of a couple of Macedonian Successor armies.

Finally I started my latest project an Austrian Seven Years War army in 6mm, for use with Volley Bayonet. The figures, like the other painting projects for 2019 have drawn mostly on existing figures in the existing lead mountain, providing something of a positive feeling of progress. 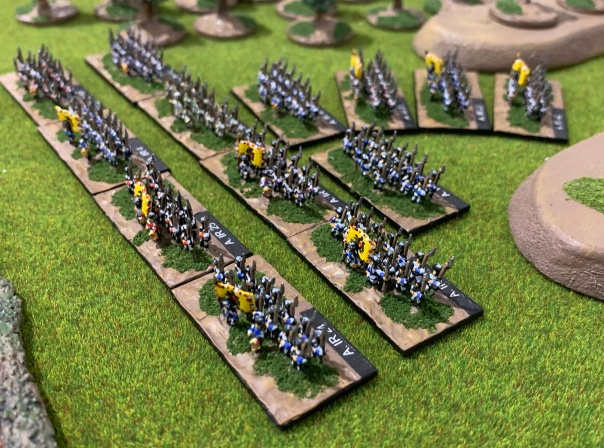 I’m rather hoping that 2020 will be equally rewarding on the painting front though of course, only time will tell how much further progress is achieved in further reducing the backlog.

I trust that 2020 is kind to you and your family and that you have many hours of enjoyable reading, painting and socialising around your gaming table.

As many readers know I enjoy the DBA rules and as such they are a staple of my normal week of gaming. For me they provide a great opportunity to move some miniatures around the table, indulge in my interest in Ancient and Medieval wargaming and equally importantly, allow me to forget about some of the other challenges of my week.

The Christmas period has provided an even greater opportunity to play some DBA games often with our son but also with other locals. Over the last week we have found ourselves immersed in the Punic Wars, fighting civil wars in Japan, campaigning in the New World and exploring Dark Age Briton. A true kaleidoscope of warfare.

However, we have also been campaigning in South East Asia. In particular the Sultan of Malacca opened up a new campaign against Sumatra. While recording all these engagements is impossible a few photos and a report of a recent action in the steaming coastline of Sumatra can be found here.