Over the last year I count myself fortunate to have been able to safely enjoy the company of others around the gaming table. Over the year our regular multiplayer games using Volley & Bayonet have involved our Napoleonic, American Civil War or Franco-Prussian War armies. All have provided plenty of enjoyment.

I’m also aware that my Seven Years War miniatures have not been deployed for around a year. Our current forces are relatively limited and therefore not suited to a multiplayer format. However, this week my Austrians were able to face my opponents Prussians in what was a fascinating game involving one player aside.

I am continually reminded how different the battles of the various periods play using Volley & Bayonet. This latest battle being testament to the more deliberate Seven Years War battle, especially when using infantry. This of course is a result of the simple but subtle period specific rules.

For those interested a short report of our latest Seven Years War action, with Field Marshal von Daun continuing his campaign against Frederick the Great, can be found here.

Finally, after quietly sitting in the lead mountain the first of my Seven Years War Austrians have taken the field against Frederick the Great.

The Seven Years War is an interesting period and one which has appealed as a miniatures project for many years. However, stirred by my visit to the battlefield of Kolin and Hapsburg Vienna a couple of years ago I finally made some progress. Yes, its hard not to be taken by the period with so many fine statues of those great Austrian generals proudly marking the tenacity of Austria to Prussian aggression.

Fortunately one of my regular opponents had previously completed a significant proportion of a Prussian Seven Years War army in 6mm. However, with no period opponent these Prussians were used to represent the Prussians in 1806, a role that they have fulfilled diligently for many years. 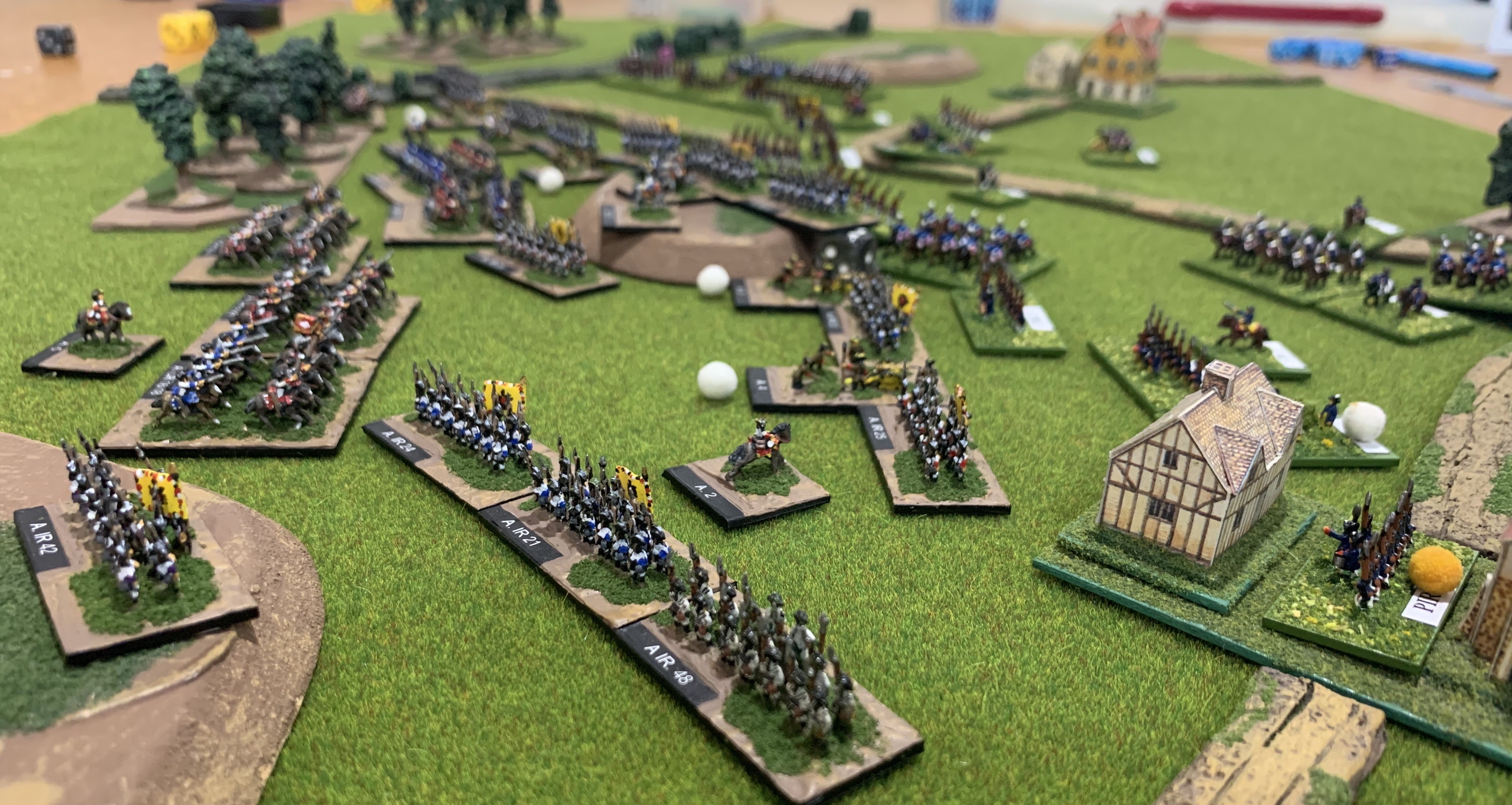 I have of course posted previously on painting the Austrians. However, if you are interested there is now a selection of photos and description of our first 6mm Seven Years War engagement fought using Volley & Bayonet, you can find it here.

Being in Prague recently I took the opportunity to visit the battlefield of Kolin. As it transpired I was on the battlefield on the 13th of June, just short of the anniversary. Unlike some who have visited this battlefield as part of a tour, I was visiting by myself so ensured I had a reasonable selection of maps. In particular I had “Fredrick the Great A Military Life” by Christopher Duffy and “Kolin 1757” by Simon Millar. For completeness I also took a copy of Frank Chadwick’s Kolin Scenario map designed for use with  Volley & Bayonet. I found Millar’s maps particularly useful on the day.

Above, looking back towards the village of Krzeczor, distant right, but obscured. Below the monument.

Walking back to Krzeczor even today the church remains a significant building. While today it is little worse for wear it sits in a commanding position and I was struck by its defensible nature, especially considering the stone wall that surrounds it.

Below, a view from the grounds of the church looking towards the Kaiser Strasse. Just visible in the foreground is a portion of the churchyard wall.

The 800 or so Croats had a strong position, reinforced by additional infantry it would have been extremely difficult to secure.

Now, back to the monument. Of particular interest was that beyond the monument the hill flattened effectively creating a plateau. There is a slight rise towards the Krzeczor Hill summit, illustrated in Millar’s book, but it was a minimal slope compared to that running from the Kaiser Strasse to the village of Krzeczor and monument. I’ve tried to illustrate this in the next two photos.

Above, a view on the plateau from the road between the villages of Krzeczor and Bristivi. Careful inspection will show the rear of the Austrian monument, an eagle wings extended, sitting high among the left wooded area. Krzeczor village is on the right obscured. The Kaiser Strasse is completely obscured from view on the plateau.

Now, the Prussians advanced across this ground, having driven the Croats from their positions, crossed the road where I’m standing and engaged Wied’s Austrians in the distance of the photo below. Again there is almost no level change here.

To the east of these photos is the location of the Oak Woods. As Millar details in his book the Oak Wood has gone. However, driving east from Krzeczor village to Radowesnitz village the terrain is very rolling with multiple undulations and extremely limited line of sight. Millar’s map suggests some undulation but it is if anything understated.

A road from Krzeczor village tracks directly from the rear of the village towards the west end of Krzeczor Hill and behind the Austrians line in the photo above. There is a very gentle slope west to the top of Krzeczor Hill, but on reaching the top, today marked by some trees, the ground sloped off quickly to the west.

From here the Przerovsky Hill (right centre) can be clearly rising in the photo below, This hill marks the western end of the Austrian infantry line. Note the road in the left going downhill towards Libodritz. 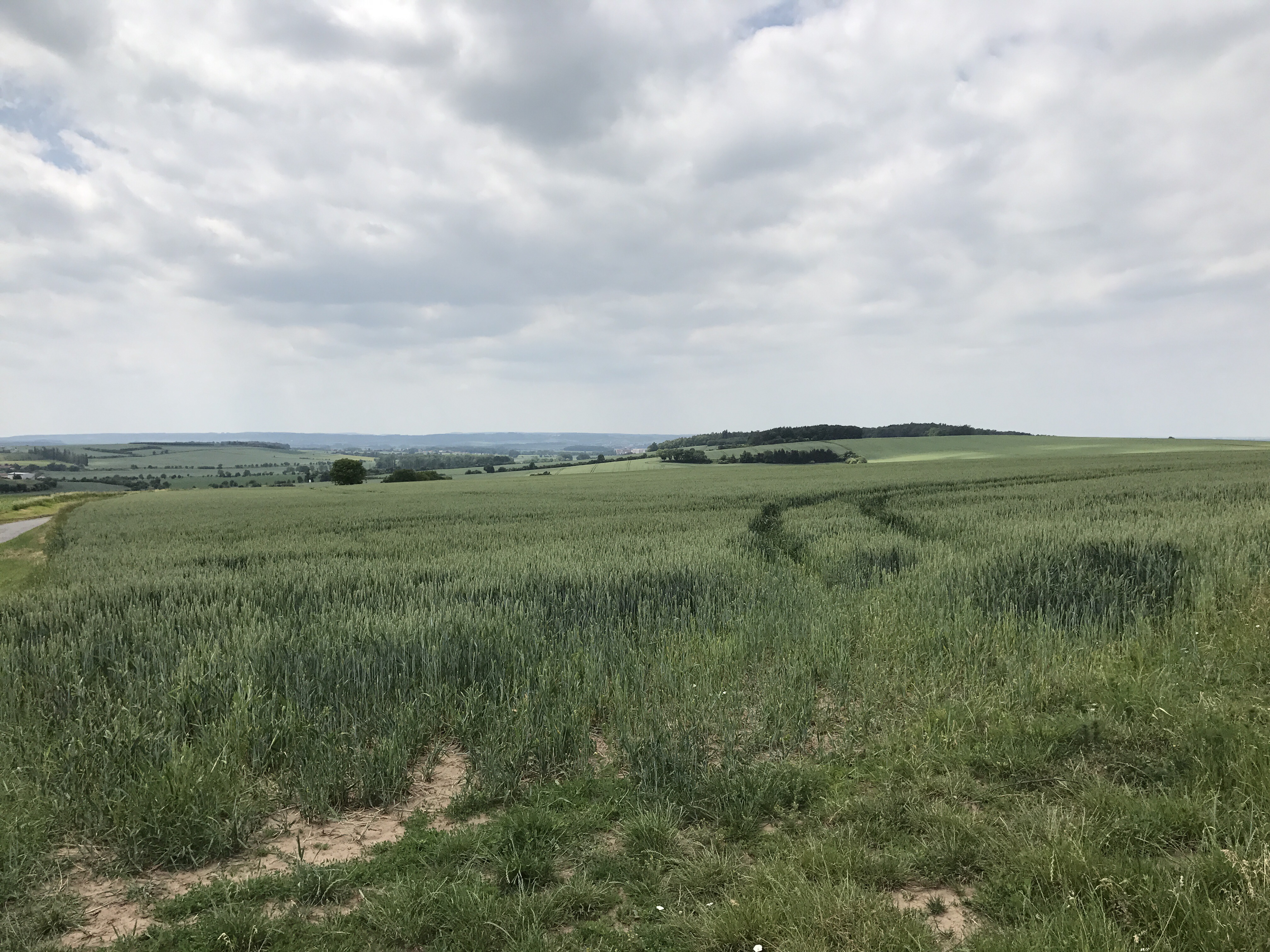 Przerovsky Hill, west of Krzeczor Hill, is a dominating feature. However the road that connects Chotzemitz to Libodritz is itself steep and would have been a considerable obstacle to advance over. On Duffy and Millar’s map the ridge is extended, on Chadwicks interpretation it isn’t, though in my opinion it needs to be. I couldn’t find anywhere to park on the Prussian side so the photo below is taken from an Austrian perspective.

Between the villages of Chotzemitz and Brzesau Millar provides a photo of a small religious shrine, which I have included below as a reference point.

If you look to the right following the road you see Brzesau, pictured below. This is the area that the Prussian 20th, 25th and 40th Regiments would have advanced over.

To their front was the Przerovsky Hill which can be seen below as the wooded high ground today. A portion of the shrine on the right as reference. 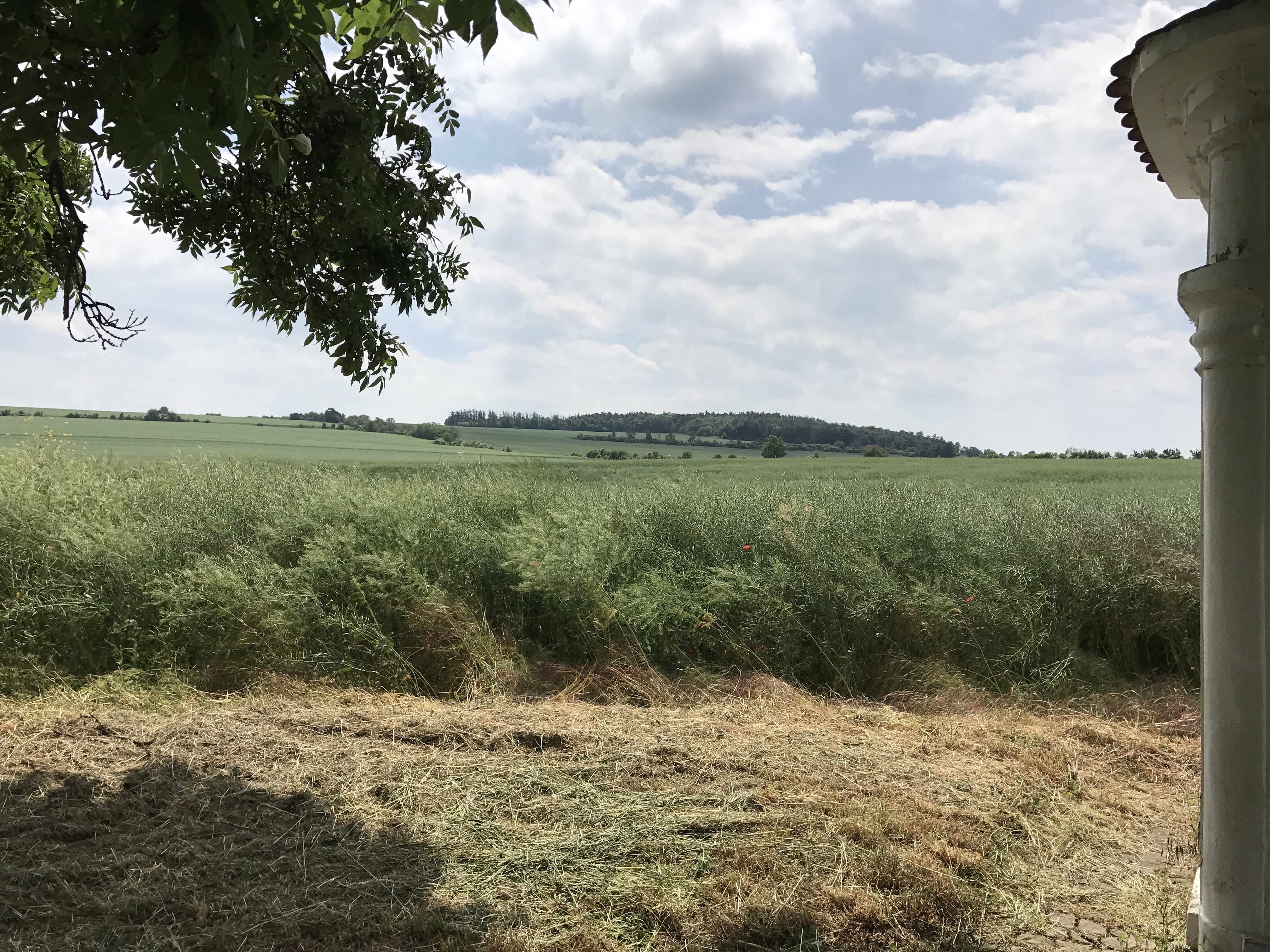 I found the battlefield of Kolin very rewarding to visit. It is very much untouched. As a result it is very easy to see the Prussians and Austrians fighting across the fields even today. The visit however highlighted several points I hadn’t fully appreciated.

Firstly, the two hills form a much longer ridge which must have prevented Frederick from observing the Austrian movements. Some maps show this, but the extent was not apparent. If you are modelling the battlefield with a view to refight the battle I think one long ridge is important.

Secondly, the significant plateau near Krzeczor village. Duffy touches on this when he writes: “…they had cleared the village and reached the celebrated Oak Wood behind. After this first success, instead of finding himself master of an empty ridge, Hulsen discovered that he was face to face with the Austrian division of Wied…” It really is a plateau and until you are on it you can’t see what awaits.

Now, some logistics. If you are considering such a trip I hired a rental car from Prague’s Hlavni Nadrazi train station which allowed relatively straight forward travel to the battlefield thanks to clear instructions from my iPhone, I was travelling by myself. Your navigator may be as good as my phone but without it I wouldn’t attempt the trip. In fact I had more troble getting out of the train station than actually following the instructions on route.

Finally, I would like to acknowledge the useful advice from my good friend Maurizio Bragaglia. Maurizio answered several questions as I tried to determine the best way to get to the battlefield.