The Sengoku Jidai period, which roughly ran from 1467 AD to around 1616 AD is a fascinating period in Japanese history marked by social upheaval, political intrigue and near-constant military conflict. Colourful and massive armies clashed across the country in a series of campaigns. It seems ideal to represent in the table.

Originally I built my own Japanese, mostly purchased second hand, for use with my preferred Renaissance rule set DBR. Typically DBR is used for large games on large tables. As a result in all that time I have used the army with the DBR rule set I have only managed a couple of games against other Japanese armies. Something was missing. Over recent months a regular opponent and I have been engaged in a series of Sengoku Jidai encounters using DBA. DBA of course is based around small armies and short games. The armies were now out on the table and providing excellent games in our mid-week gaming slot. Even more interestingly these smaller games have had considerable variety, more so than the large games which tended to use all my miniatures.

In part this variety is due to the options in the DBA army lists. The armies have a core of standard troops which is varied by yari armed ashigaru, various town or Ikko Ikki militias, or the warlike Sohei warrior monks. In addition unusual options such as command posts, dismounted generals and bodyguards, as well as cavalry supported by dismounted followers, can be fielded. As a result, assuming players make the most of the options, considerable variety between games can be achieved. 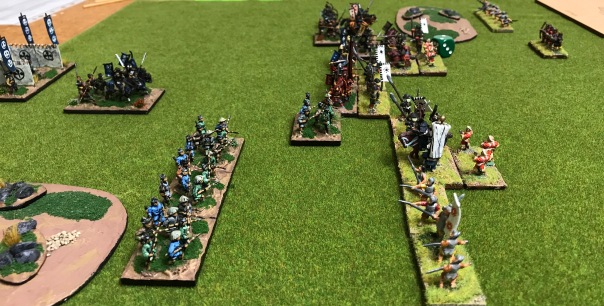 Now I know that DBA is not for everyone. However, the ability to fight battles between historical enemies with a pleasant opponent provides, for me, an enjoyable gaming experience – especially when time is limited. Last night additional variety was introduced when another player visited and fielded a Yi Dynasty Korean Army. Here was another seldom seen army and yet again DBA produced an excellent evening of gaming. A few photos of this game can be found here.

Like many readers over the years my miniatures collection has grown to the point that I have trouble finding time for games involving the various armies in my collection. That’s despite not having that many armies. Sometimes this of because of changing trends, but at other times there just is only so much time. As a result collections just don’t get out of the box.

I’m fortunate that I get to play a range of periods and rules, but it was with some enthusiasm that last night my Sumatran army, from the 17th Century, had an outing after a period of time hiding in their boxes. The resulting game, using DBR, was extremely enjoyable for both players. Interesting armies, unusual troop types and the vagaries of the dice added much to the game and resulted in an excellent evening of gaming. 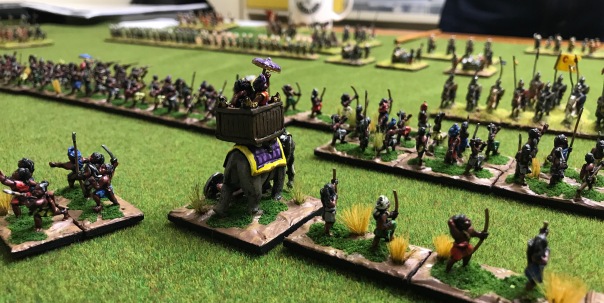 The Sumatrans are an unusual army, comprised mostly of charging foot with support from archers, skirmishers and a few elephants. Their opponents on this occasion were Ottoman Turks, who themselves are an eclectic lot and comprise mounted of variable quality, a significant artillery train and foot with, shall we say, a range of capabilities. A few photos of the game can be found on my Renaissance blog here.

As many readers will know I have more than a passing interest in Renaissance warfare, especially that of the 17th Century. As such I found a recent documentary posted to YouTube rather interesting and thought others may as well.

The short 30 minute documentary looks briefly at the Thirty Years War, and specifically the battle of Lutzen. It provides a mix of modern re-assessment of the Thirty Years War and Sweden’s role, battlefield archaeology, archival research and forensic investigation. This is assembled well without being dumbed down too much. In addition it provides as an interpretation of events in the central sector of the battlefield.

I trust you find it of interest.

Well over a year ago I wrote a short review of an English Civil War Gaming Scenarios book a friend from Timaru was kind enough to lend me. This volume was the first in a series which I purchased, but until recently had not reviewed.

Yesterday I took the time to write further short reviews of the subsequent volumes. They can be found in the Renaissance section of this site.

The second volume is probably the best with an interesting mix of battles of various sizes. Though volume three maintains a close second place there are two scenarios which I can’t see as playable with the rules I use. As a result these hat for detract a little from what is otherwise a very good selection of battles. Of course they may be ideal for people using other rule systems.

The final volume I have is volume four, which again has a couple of scenarios which I will not be able to utilise. That said, this volume does have several which are excellent, with Benburb and Inverlochy being classics and cry out for play on the wargames table.

If you have an interest in English Civil War gaming you may find these books useful. Now I just need to organise some games…

Finally I have managed to find some time to pen a few passing thoughts on Cancon 2014. Late I know, but a holiday and then a busy time on our return has a way of limiting time in front of the computer.

As with previous years Cancon was an excellent wargames convention, I am very pleased to have attended in what is now my seventh convention across the ditch. As always it is a great opportunity to catch-up with friends, either playing DBR or playing in other events. As is normal with Cancon there was a large selection of trade stands, some of which I visited. However, such visits reduced my ability to visit other gaming areas and demonstartion games. As a result the photos below are, this year, of the Renaissance DBR competition area rather than other games.

Firstly, we have Brian Sowman, on the left, and Peter Gillard fighting it out on the morning of the second day. In the background can be seen other Renaissance games in progress as well as DBMM and DBA gaming areas. To the left, but not shown, could be found a 25mm Napleonic competition which used a modifeied version of the old WRG rules.

Next a couple of photos of a another Renaissance game this time between Roger Mackay’s Dutch Rebellion army and Lyle Daymond’s Russian Traditional (1631) army. Of general  interest is the view of another portion of the convention area in the background. Cancon is a large convention and the tables keep flowing to the right with trade satnds to the left. Near right is the FOG Renaissance area.

Below, another view of the previous game, this time illustrating these two well presented armies in more detail. The Russians are on the right. 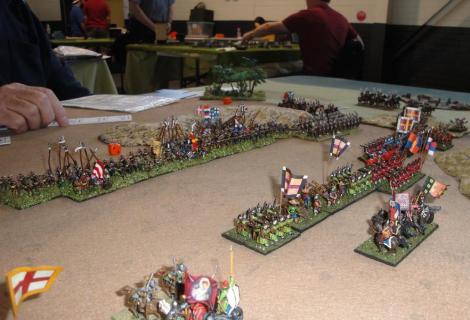 Now, for those interested in reading more on the subject I have just put on-line a summary of my own games in the Renaissance DBR competition. The report can be found here.