Last night we managed another Big Battle DBA game. As I mentioned previously I was particularly interested as it came just two days after a 300 point game of DBMM creating an opportunity to compare the two rule sets. In addition, as we used similar armies, both based on Hellenic Successor states, comparing the two games was even easier. 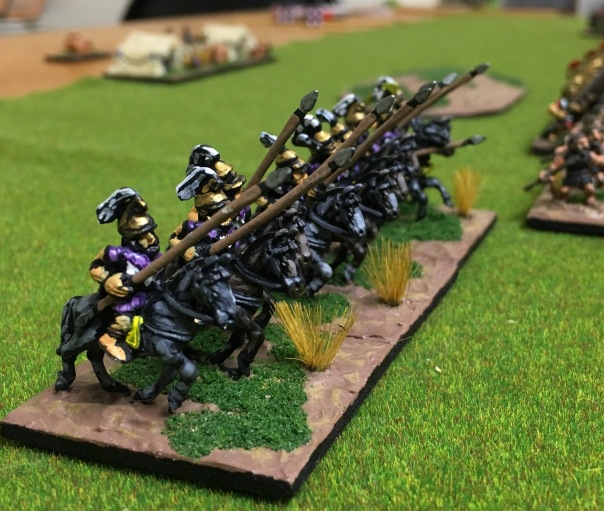 As to the specific armies, for this latest encounter I deployed a Lysimachid Successor army while my opponent deployed Graeco-Indians. Both armies of course had a core of phalangites and similar mix of supporting troops to our MM game. That said there were some differences as the DBMM lists allow more army composition while DBA armies are generally more restrictive. 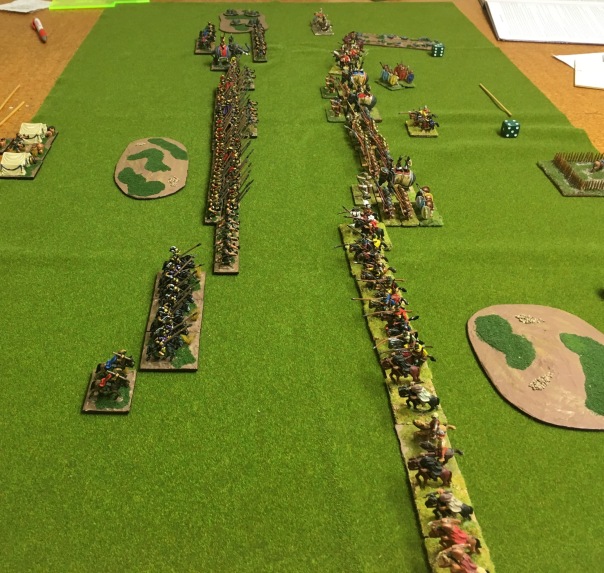 For BBDBA we used a table that was 1.2m wide by 0.6m in depth, which was of a similar width, though narrower, to that we used for DBMM. The most obvious difference was the deployment width of our troops. My phalanx for example while being only five stands wide in MM, though four deep, was now nine stands wide but only two deep. It’s worth noting that the figure scale had changed. While DBMM has a nominal troop scale of 250 men per stand DBA suggests a scale of around 500-600 men per stand. As a result my pike phalanx alone had grown from 5000 men to around 10,000 men. Now to the battle…

The Lysimachus was determined to be the invader, and invading Bactria. We used a slightly modified deployment system with the players recording the relationship of commands to each other after camps were placed but before any troops were placed. The armies deployed symmetrically with heavy foot in the centre and cavalry on each wing, but the Bactrians maintained an advantage in cavalry and elephants, the Lysimachid in heavy foot.

The battle started with the Bactrians, not surprisingly, sweeping forward against the Lysimachid right flank with their Iranian lancers destroying all before them. However, before they could exploit the success the centre and other wings were engaged. 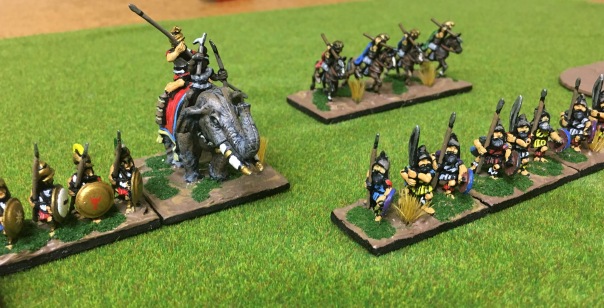 So how did the two games compare. DBMM, without doubt has much greater detail, but this detail comes at a cost of increased complexity. I feel the same aspects are modelled adequtely in DBA. Let’s consider some examples. The Graeco-Bactrian thureophoroi were still superior in combat to the Thracian auxilia and the Bactrian horse still outnumbered the Lysimachids with deadly results. Psiloi played an important part in front of the main phalanx. They disrupted enemy main line or attempted to counter elephants. Yet, they eventually retired through the lines as the phalangites pressed their attacks, just as in DBMM. Then there is the phalangites who swirled back and forth for some time each gaining an advantage, but nothing massive, with the possible exception of the loss of a Graeco-Bactrian general and on the flank of the Lysimachid phalanx which was eventually turned. As casualties mounted command break and demoralisation set in, just as with DBMM. As commands broke commanders struggled to find troops to exploiting success.

From my perspective it was an outstanding game. From turn one I was on the edge of my seat. Clearly out deployed, my army seemed doomed but the game evened out and soon the Graeco-Bactrian commander, who had victory in his grasp one moment was starting to consider defeat as a real possibility.

DBMM has some real strengths, certainly it has significant detail which can be ideal for players seeking this. I may perhaps occasionally play DBMM, but the rules are more complex. In contrast the larger DBA 3.0 games capture enough extra challenges and provide further visual spectacle for those players seeking that. I think BBDBA will work well in historical settings which is my main interest, but less well in a competition.

I don’t see BBDBA replacing standard DBA which remains my preferred Ancients game. However, I can see it supplementing it. Of course your requirements or preferences may be different. Either way, we are spoilt for choice.

Last night we managed a 300 point game of DBMM using the latest version of the rules, v2.1. Given that it’s been a year since my last game of MM I expected to find the rules challenging. Indeed they were and while I can play DBR and DBA in the dark I felt as if I had a blindfold when playing DBMM such was, of course a combination of unfamiliarity and the level of additional complexity. Here are a few observations from the game for those interested in such things.

Firstly, and to set the scene, we deployed on a table 1.2m in width and 0.9m deep, which was ample. My Alexandrian Macedonian army of 300 points organised in three commands along with a baggage command. The Macedonians  comprised a large phalanx which was supported by Greek hoplites, a few Thracian and Greek Auxilia as well as a number of Psiloi. The mounted were few in number with Macedonian horse on the right and Greek on the left. Alexander was campaigning as he would have been to brilliant by far. 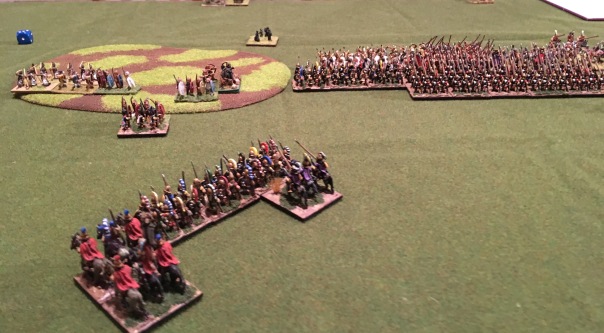 In opposition Jim deployed Graeco-Bactrian, but organised it into only two commands. His phalanx was considerably smaller and a mix of Hellenic pike and Indian Spearmen. This was however well supported by Indian archers, military settlor thureophoroi and cavalry, the latter being a mix of Iranian lancers and Bactrians.

The Macedonians deploying first, despite being the invader, which gave some advantage to the Graeco-Bactrians. It’s one of the little occasional extra bits to DBMM which adds flavour. The weather was uneventful. Aware of the massive advantage in mounted troops the Macedonian foot surged forward. The plan was simple. Defeat the enemy centre while delaying on the flanks as much as possible. Of course with all such plans it went off the rails almost immediately. The allocation of PIPs is like BBDBA, you allocate the highest die to a designated command, the next highest to another. So like BBDBA it’s important to have a plan.

The Thracian foot, tasked with securing the rough ground on the left was first to suffer devastating archery and then a counter charge by enemy thureophoroi. The disastrous situation was recovered, somewhat, by reformed Thracians and some Cretan archers. Fortunately on the Macedonian right things went slightly better where Greek peltasts held the advances of another body of enemy thureophoroi. I learnt two clear points from these encounters. Firstly, the value of troops rated as “superior” when attacking and secondly the power of archers. I’m not completely sure I understand Phil Barker’s thinking around the superior grade, especially in relation to Auxilia. I’ll ponder this interaction further. 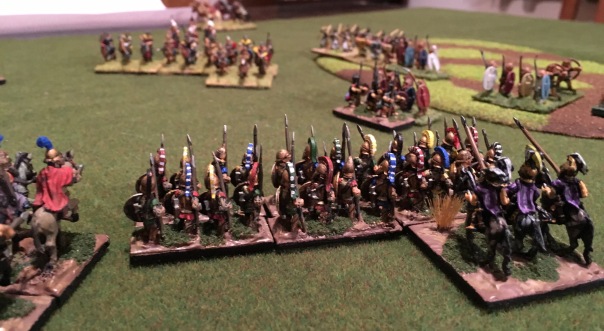 On the Macedonian left the enemy cavalry swept towards forwards. Careful use the Macedonian light cavalry however broke up the Iranians who struggled to manoeuvre with low PIPs. In time they broke up into a spontaneous charge. This part of the engagement illustrated well the restrictions on complex manoeuvres by both foot and mounted troops well. It’s reasonably complex but generally makes sense.

In the centre of course the main lines soon clashed The Macedonian foot were proceeded by light troops whose javelins and archers broke up the Indian spearmen. As the light troops fell back the hoplites and phalangites pressed their attacks. In the resulting combats the opposing phalangites pushed and shoved each other with limited gain. The Indian spearmen were however mostly pushed back with casualties. In MM the attacking pike, in deep formations, gain considerable combat advantage. It’s an interesting addition and is not surprising, though it adds additional complexity. It seemed to work well. Yet I generally feel the situation was handled well enough in DBA and while the complexity of MM was interesting it didn’t add significantly to the feel of the pike clash. I’ll certainly think some more on this. 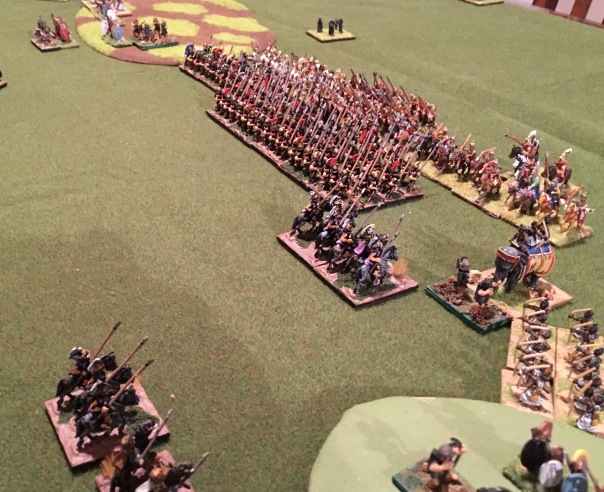 Unfortunately we made slow progress and we had to end the game before a result was determined. This slow progress is typical when playing a different rule set, indeed I always have the same problem when playing “Lost Battles” which I only play very infrequently. With practice speed will I’m sure be gained with DBMM, assuming I play it enough. Overall much of the complexity made sense and was intuitive which was, I thought, positive.

Tomorrow evening another Successor clash is planned, this time with BBDBA. It will be interesting to contrast the two rule sets in games separated by as many days.

While my main Ancients wargaming these days revolves mostly around DBA I maintain an interest in Phil Barker’s other rule set DBMM. As such I have purchased each of the two previous versions of DBMM and played a handful of games. Today my copy of his latest version of DBMM was delivered, specificaly version 2.1. 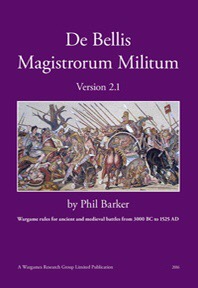 Ancients of course is fragmented these days, which I don’t believe is a bad thing. So why do I still have an interest in DBMM, when I play a reasonable amount of DBA? Well, DBMM has some appealing features for me. Obviously it provides some additional depth. Now I don’t want to spend hours playing a single game some extra depth can be appealing on occasion. I see DBMM’s additional depth in its special rules for weather, ambushes and stratagems. Now, I have no plans to build large armies but rather expect any games I play to use smaller armies comprised of 200 to 300 points, much like my 300 point DBR games and BBDBA armies.

This latest version of DBMM, like DBA, is availiable as a hardback. It comprises 77 pages with a solid binding. The core rules run to around 40 pages. This is supported by around 17 pages of diagrams, which like DBA will add much to understanding of the rules. The most obvious change to the presentation, apart from the binding, is the increased font size.

Interestingly, and something new for DBMM, is the inclusion of a selection of sample army lists. These comprise four matched pairs, so eight lists in total, with one pair drawn from each of the old army list books. The format is that which DBM/DBMM players will be familiar with and runs to around 13 pages. The historical pairs included comprise:

Now, I don’t expect to play a large number of DBMM games but those I do will likely focus on more themed games between historical or near historical opponents. Therefore I rather like the concept matched pairs as way of an introduction and encouragement for the use of historical opponents. Before I can consider some games however I need to spend some time reading the rules…