I have just spent the last three days exploring the battlefield of Chickamauga. While I had planned to spend two days spread between the battlefields of Chattanooga and Chickamauga and another day on other activities.

The 18th to 20th of September mark the 155th anniversary of the Battle of Chickamauga and my visit landed at the very beginning of the anniversary activities. My plans, fortunately flexible, quickly changed when I realised the depth of the programme.

Chickamauga is an extremely complex battle and one that I have always struggled to understand. Determining how I may describe my visit has also caused me some thought. For example would I summarise my thoughts based on each day of my visit – which didn’t follow the timeline. Perhaps I then wondered if I should follow the driving tour schedule. In the end I just opted for something different.

The Chickamauga Military Park is around 5,300 acres and encompasses much of the historical battlefield. Like most Military Parks it has a driving tour. The tour however does not take in any where the near all of the features. In my view you need to explore further. Even if you just focus on the main driving tour to fully need Chickamauga you need to park and really explore on foot.

The park is heavily centred on the LaFayette Road which runs north to south. From here there are some intercepting roads and a couple that generally run parallel, at least in part.

A couple of places worth considering including on your visit are are the Lee & Gordon Mills, just outside the park, as well the Chickamauga Creek that runs down part of the parks eastern boundary. The section of Chickamauga Creek above is near the Alexander Bridge where Wilder was engaged on the 18th. Both are well off the driving tour, but provide some context.

On the first day of my visited I was rewarded by three events. First was a living history event describing one of the Confederate advances. This was then followed by two historical walks led by Park Historian Jim Ogden. In the first we looked at Confederate General John Jackson and George Maney’s brigades on the 19th. The second explored the fighting in Brock Field, also on the 19th. Both lasted around two hours. Jim’s talks were extremely informative and given his audience is frequently military groups, I was fortunate to be able to join the tour.

The following day I joined two more of Jim’s tours. The first looked Robinson’s Brigade, Hood’s old Texan Brigade, and its attack as part of Longstreet’s attack. Starting off deep in the woods where Longstreet’s brigades formed we followed Robinson’s route of advance, moved with his brigade as it advanced towards Dyer Field, below, and watched as Hood was wounded rallying his old Texan Brigade.

Above, the South Carolina Monument is just visible in the distance across Dyer Field. Jim really bought this advance to life speaking generally without notes he described the advance as well as nearby events in detail. His frequent use of large map boards was also of course useful.

The second looked at Harker’s Brigade at the time of the breakthrough. Starting at the original position prior to 11am near Brotherton Cabin, above, and then as it moved north and the counter marched.

Of course there were many other parts of the battlefield to explore. One obvious was Kelly Field, below.

Below, a very small section of the Union line around Battleline Road on the 20th. Union works were strong I spent considerable time reading each of the brigade and battery markers down this long road as well as several opposite.

One of the fascinating aspects of walking a battlefield is it helps you understand a little more of the terrain. For example at Brotherton Field the very pronounced ridge line on which the Union guns were deployed on the 19th, below, but which was not held on the 20th. George Buell’s Union Brigade instead forming along a wood line in a reverse slope position.

Below, another view of Brotherton, this time showing Confederate guns deployed on the 20th, part of the area where Longstreet’s attack broke through. 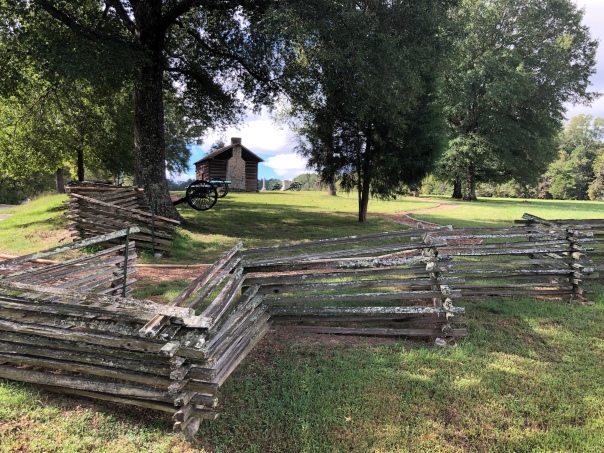 What would a summary of Chickamauga be without a couple of photos of Horseshoe Ridge?

Above, the Union left and below one of the many monuments that mark the line as it extends to the right, this one of the 2nd Minnesota.

One of the challenges I have had understanding Chickamauga is the density of the trees. Today much of Chickamauga’s woods have a heavier undergrowth than they did in 1863. However, the park mechanically creates the correct level of undergrowth in some parts of the park and replicates that which was created by grazing by stock.

I have had a fascinating three days at Chickamauga. Trying to capture the visit in photographs has been difficult. If however you manage to visit I do encourage you to try and walk at least a few of the attacks as I did.