Yesterday we thought it time for a small Sails of Glory encounter. Given Alistair had recently purchased a model of the USS Constitution it seemed fitting to try an encounter between the Constitution and two British frigates, commanded by Jon and myself. 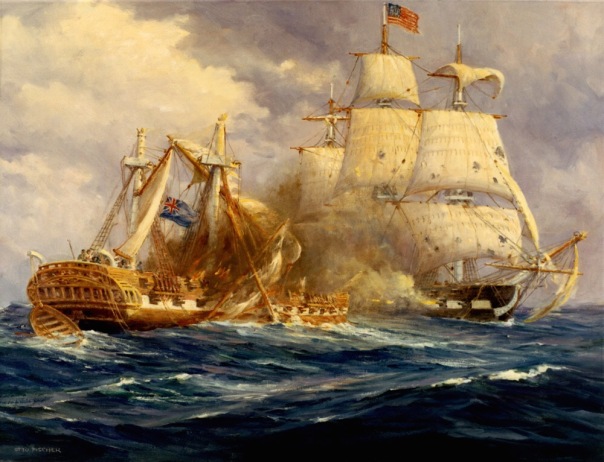 The Constitution, rated as a 44 gun heavy frigate, often carried over 50 guns. As such she greatly outgunned the individual ships making up British squadron opposing her. The squadron comprised HMS Amelia, a 38 gun frigate, and HMS Meleager a 32 gun frigate. The small British squadron, travelling in line abreast, held a northeasterly course approached the Constitution who was to  starboard, and who held a northwesterly course. The wind blew generally from the south.

HMS Amelia, commanded by myself, was first to break position swinging hard to starboard in an effort to position herself behind the American and potentially upwind. Moments later Captain Isaac Hull (Alastair), commanding the Constitution, ordered a move to port which resulted in the Constitution moving to a position between both British frigates but down wind of the Amelia.

HMS Amelia and the Constitution now engaged in a series of broadsides and while the initial exchanges were in the Constitution’s favour HMS Amelia inflicted some damage. The captain of HMS Meleager (Jon) had unfortunately miscalculated and while unleashing one broadside HMS Meleager soon found herself out of range and down wind, effectively isolating her from the battle for some time.

Above, the view from the Constitution with Amelia about to be bow raked. In the far left HMS Meleager can be seen, well out of the engagement. In Sails of Glory terms seven damage counters were drawn, of these six inflicting heavy damage on HMS Amelia.

While HMS Amelia responded in the ensuing minutes her broadside was now so limited the damage on the Constitution was of little consequence. HMS Amelia broke off the action and limped out of range. 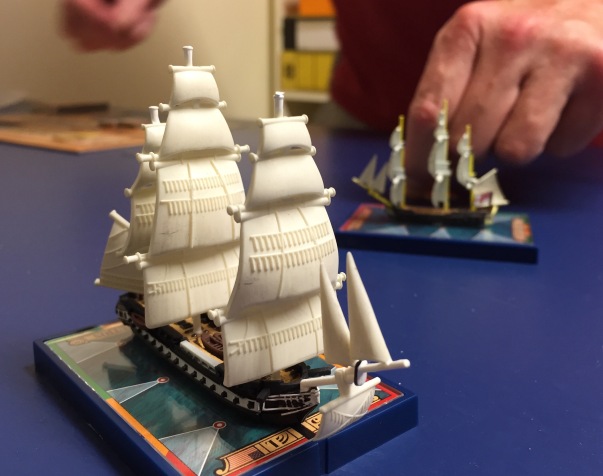 If the withering broadsides were not enough, being down wind HMS Meleager was unable to manoeuvre effectively. With damage mounting her captain also ordered the Meleager to break-off.

An interesting and enjoyable game, but one that the British ships were clearly both outmanoeuvred and outgunned. Plans to combine the fire of the British squadron quickly evaporated as the vessels manoeuvred for advantage. Individually the lighter British frigates stood little chance against the heavier vessel who manoeuvred well throughout the encounter.